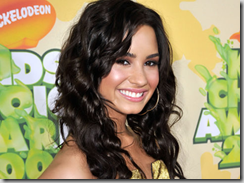 Teen Disney star Demi Lovato stunned fans when it was announced that the star had dropped out of her Jonas Brothers tour gig to seek help treatment for "emotional and physical issues," according to her representatives.


The "Sonny With a Chance" and the "Camp Rock" star has struggled with eating disorders and cutting herself in the past, according to the Associated Press, although it's unclear if those are the reasons why she left the tour.

But what is cutting? And why might someone - in many cases teens - self mutilate?
There's no one reason.

Often times, the individual is practically bursting with overwhelming feelings and this can be too hard to bear," Dr. Michael Hollander, director of 3East at McLean Hospital affiliated with Harvard Medical School in Belmont, Mass told the News.

Cutting releases opioids into the bloodstream and can actually cause the person to feel suddenly very calm.
"I would say 80% of patients self-injure for emotional regulation," said Hollander.

The release of endorphins is short-lived, however and the feeling being overwhelmed returns.

Others cut themselves because they feel numb and empty. The rush of endorphins can make the cutter briefly feel alive again.

It isn't easy to tell when someone you care about is cutting or causing themselves injury since many adolescents cut themselves on their bellies or thighs - body parts that aren't easily seen.

"It's hard to tell if you can't see the marks," said Hollander. "A tell-tale sign is when you see someone wearing long sleeves in the summer.

There are many factors in a person's life that can lead them to seek emotional solace from cutting: Bullying, low self-esteem are only a few.

"The kind of person who would exhibit this type of behavior is an extremely sensitive individual," said Hollander. "Their environment hasn't caught up to their emotional needs."

It's important to note that the person who cuts is not necessarily suicidal although the behaviors are linked.

While there is no medication to treat cutting specifically, there are several kinds of cognitive therapies that have proven very effective in helping people deal with their out-of-control emotions.

The star has been dealing with "emotional and physical issues . for some time," her rep confirmed to People, adding, "Demi has decided to take personal responsibility for her actions and seek help."