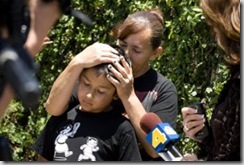 An unidentified neighbor reacts as she arrived with her son at the site of a home...

ANAHEIM, Calif. (AP) — A 3-year-old boy who hid behind a trash can in his own backyard for 12 hours, bleeding from gunshot wounds and just feet away from his dead parents, was hospitalized in serious condition and was expected to survive, police said.


Police followed a trail of blood Monday morning to the terrified and gravely wounded boy, who ran and hid after his father reportedly shot his mother and committed suicide.

The child was found after one of his father's co-workers came looking for the man and instructed the boy's 5-year-old brother to call 911. The 5-year-old had run from the Sunday evening gunfire and hid inside the family's house.

He told the dispatcher "his dad killed his mom and shot himself and he can't find his brother," Anaheim Police Sgt. Tim Schmidt said. "He said he could hear his brother screaming and hollering."

When officers arrived, they found the parents' bodies sprawled across lawn chairs in the backyard and a trail of blood leading to the younger boy, who had been shot three times in the shoulder, stomach and chest.

"This is a horrific scene," Schmidt said.

The 3-year-old was taken to UC Irvine Medical Center, where he was listed in serious condition. He underwent surgery and was expected to survive, Schmidt said.

A motorist reported hearing gunfire in the neighborhood Sunday evening, but officers who responded were unable to find where the shots came from and left.

On Monday, during a "traumatic and emotionally draining interview," the 5-year-old told investigators his father tried to shoot him, but he escaped injury and hid inside the house. He was placed in protective custody.

Schmidt said he didn't know why the co-worker didn't call 911, but said it was possible the person wasn't fluent in English.

Police blocked off the street leading to the family's single-story house, which is in a residential neighborhood behind a strip mall. A black tarp covered the view of the open garage; a minivan was parked in the driveway.

A woman who lives two doors down said her husband worked with the suspected gunman at an auto body shop in Buena Park, an Orange County suburb northwest of Anaheim.

"He was a very decent man," Alisha Maldonado, 36, said of the father. "We're very surprised by what happened."

Ramon Maldonado, 48, lived two doors down from the couple and worked with the father about two years ago at an auto repair shop.

"I used to drive with him every morning and he seemed pretty mellow," he said.

Maldonado said the pair worked together at the auto shop, but had a testy relationship and had financial problems.

He said the children behaved well.

"They're good little kids. She would take the kids to the shop. I would never think he could do that, there's no way," he said. "That could have never crossed my mind."

"He was nice to the kids, I don't know what happened," he said.