Do You Think Your Teen Is Cutting? You're Not Alone 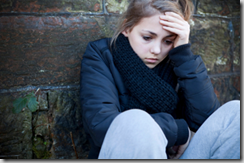 The teenage years can be tough - we all know that. Many teens don't know how to deal with the confusion and inner turmoil that comes along with adolescence, and some may resort to drastic measures, such as cuting and self-injury, as a way to cope with their emotions.


The Self Injury Foundation describes this type of behavoir as non-suicidal self-injury (NSSI), and defines it as the deliberate harming of one's body resulting in injury. Besides cutting, other forms of self-injury include scratching, burning, hitting or biting oneself, hair pulling, and deliberately interfering with the healing of wounds.

It is important to distinguish between NSSI and suicidal self-injury. Most people who engage in NSSI are not attempting suicide, but are instead using self-injury as a coping strategy to deal with their problems. However, in some cases the injuries can be life-threatening. And since most self-injurers consider their behavior a shameful secret, many cut or self-injure in private and go to great lengths to hide their wounds.

Unfortunately, the statistics on teen cutting and NSSI are vague, and it is unclear how many kids suffer from NSSI - evidence that this serious issue requires much more attention. But one statistic is clear and alarming: Kids who cut are 75 times more likely to commit suicide, according to the Adolescent Counseling Service.

From FamilyEducation.com
at 11:00 AM