Rather than registering at the typical stores, William and Kate have instead decided to create a network of 26 charities that guests and fans can donate to in their honor. 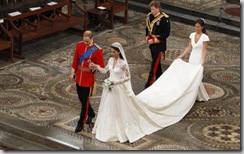 With the whole world buzzing about today's nuptials of Prince William and his bride, Kate Middleton, there is in air of giddiness around many corners of there world. There is, however, a more serious component: The gifts. What exactly do you get the couple that has literally everything?

Rather than registering at the typical stores, William and Kate have instead decided to create a network of 26 charities that guests and fans can donate to in their honor. "The Prince William and Miss Catherine Middleton Charitable Gift Fund" was established in order to direct those gifts to the correct charities in the categories of support for services personnel and their families, conservation for future generations, changing lives through arts and sport, help and care at home, and finally children fulfilling their potential.

The category of children fulfilling their potential includes a nonprofit organization titled,BeatBullying. Middleton was reportedly a victim of bullying as a child and holds this organization close to her heart. According to their website, “Beatbullying is the UK's leading bullying prevention charity, creating a world where bullying, violence and harassment are unacceptable.” BeatBullying has worked with over 1.6 million of the youth in the UK in various school and community programs.

In an interview with Bay Windows, BeatBullying CEO Emma-Jane Cross said, “We hope this partnership will help Beatbullying’s message resonate worldwide -- that we all need to protect our children and young people who are often the most vulnerable in society. Our research shows that one in three children have been bullied -- this is unacceptable, but together we can stop this."

With the increase in student suicide following homophobic and cyberbullying, it speaks volumes that the royal couple is putting forth this effort to help a worthwhile cause. BeatBullying offers specific programs including those targeted at preventing LGBT students from being bullied as well as CyberMentors, an effort to prevent cyberbullying. Middleton may be years past her days when she was a bullying victim, but it is evident that it affected her enough to drive her to make a change for the greater good.

Email ThisBlogThis!Share to TwitterShare to FacebookShare to Pinterest
Labels: News